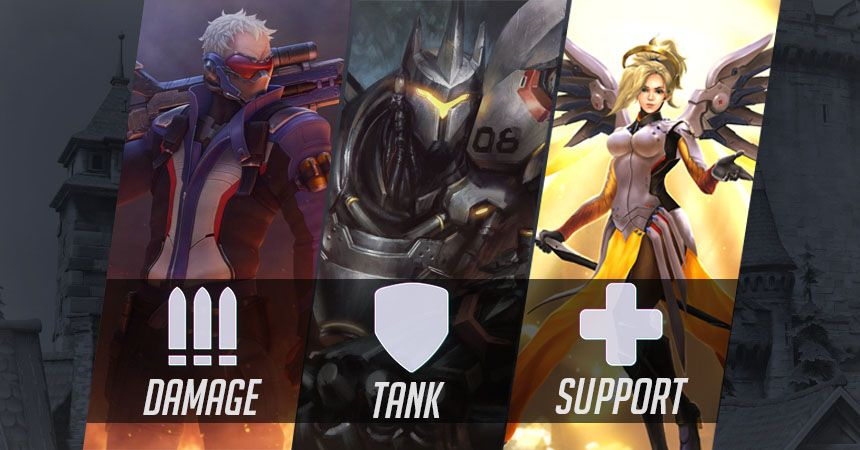 Overwatch has been attracting attention with its fun playing style, futuristic and robotic theme since 2016. It offers players several different game modes, allowing them to play with many heroes with their own special abilities.

There are 33 characters in total, including Sojourn, which was recently announced in OW. They are divided into 3 basic character categories called roles among themselves. In order to understand the game and be successful, it is useful to know what these roles mean. Right at this point, we’ll be breaking down all of the three roles in OW.

If you are playing this role, you should know that you are the backbone of the team. As in every other game, the Tank hero starts team fights, and they advance in the front. That’s why these heroes are larger and easily detectable. In general, a Tank hero has skills and high health bars to protect their teammates.

The shield mechanic in the game is mostly seen in a Tank hero. For example, heroes like Reinhardt, Sigma, Winston, Zarya, and Orisa rely on their shields to absorb the opposing team’s damage. But that doesn’t mean Tanks won’t do absurd damage either. Tanks like D.va, Roadhog, Zarya have the power to destroy you in a few seconds. For example, D.va is a character who can get Play of the Game by detonating her mech and getting hexakill within 3 seconds.

However, if the opposing team has competent DPS, Tanks can fall in a short time. That’s why Tanks often rely on the team’s healers and engage with the opposing team when they’re sure they’re adequately protected.

Now comes the role most blamed for losing the game if they don’t do it well enough: DPS. Damage is a role that determines the course of the game and your chances of winning. If you have DPS character players on your team who aim poorly and don’t know what they’re doing, you don’t have the only factor you need to win that game. That’s how important DPS is: 80% of the damage dealt to the opposing team is expected from DPS players.

Explaining Support is actually quite simple. As in any competitive game, the main purpose of a Sup character is to protect teammates and ensure they don’t die. Healer heroes like Zenyatta, Ana, Moira, Baptiste can quickly refill their teammates’ health bars. Also, a Support character named Mercy can periodically revive allies. But usually, DPS on the opposing team focus on Supports, so it is important that they are not left alone.

If you want to ensure that you win the game and have world-class and top-notch players in your team who know their job, we definitely recommend OW boosting. In this way you will have more stress-free and successful games. With this service, your boost will be completed in a very short and easy way.